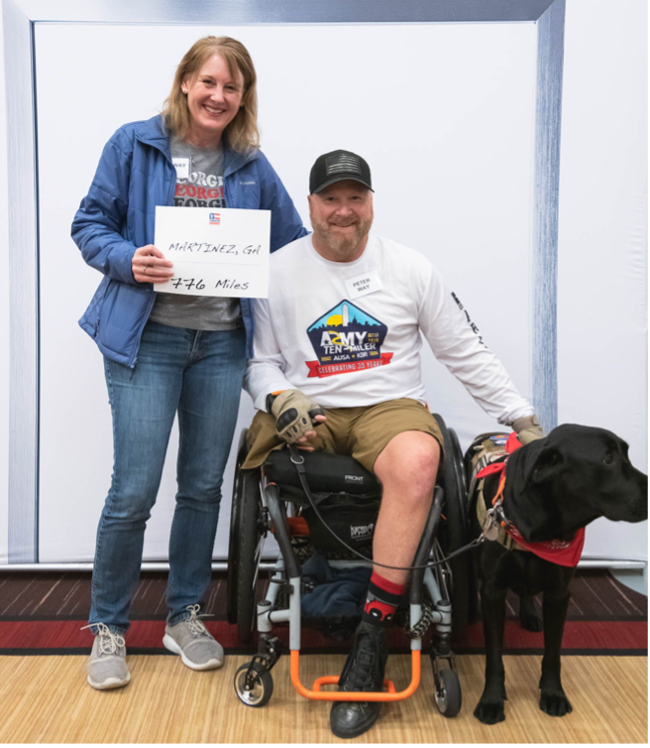 Together, Pete and Anne Way are demonstrating the power of teamwork and elevating others.

U.S. Army Major Peter Way’s military career spanned several decades. In 2003, a life-changing event occurred while he was serving in Afghanistan. Pete was wounded after a rocket-propelled grenade detonated near him. Shedding concern for his own safety, Pete quickly moved to help another soldier in danger. Pete injured his leg during the incident and the injury’s severity worsened over time. This eventually led to an above-the-knee leg amputation.

Recovery is rarely accomplished alone, and Pete’s wife Anne has been instrumental in his success. Together, they’ve helped Pete push ahead through a grueling rehabilitation process that included intense physical therapy and multiple surgeries.

“At the end of the day, I think the message is pretty simple. No one can accomplish the mission alone.” -Pete Way

Pete now finds adaptive sports to be the perfect vehicle for his continued recovery and success. He and Anne are active together in activities including cycling and Pete’s solo athletic career has thrived—he’s won several medals at the Valor Games. Pete is also a part of the Bob Woodruff Foundation’s extended family and has been featured in our annual Stand Up For Heroes. Pete is using his elevated to profile to raise awareness and to help others.

“Maybe this inspires one more person…to say, you know, ‘I’m not going to quit right now. I’m going to take that next step and do that next thing, whatever that is,'” Way told ABC News.

Anne has a long track record when it comes to helping others. She was a teacher for many years. For anyone who has worked in this field or has a teacher in their orbit, they know this job is one of the most demanding out there. Effective teaching requires one to assume many roles simultaneously while preparing students emotionally and cognitively for the world.

Anne has retired from teaching but is now Pete’s full-time caregiver. While some may, unfortunately, overlook the contributions of a caregiver, Anne has deservingly been recognized for her efforts. Last year, she was named as an Elizabeth Dole Foundation Caregiver Fellow. These fellows are an inspiring group of veteran caregivers from across the country, carefully selected each year to represent the Foundation.

Being the primary caregiver for a veteran can be extremely exhausting work, especially as we all navigate all of the difficulties associated with pandemic life. Anne knows this firsthand but also knows that there is more help out there than some realize.

“Ability is what you’re capable of doing. Motivation determines what you do. Attitude determines how well you do it.” – Anne Way