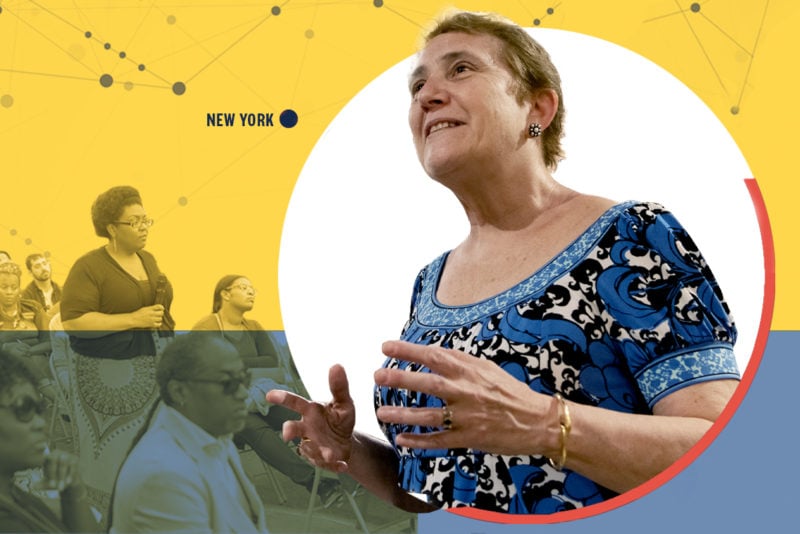 As of November 1, 2020, National Veterans Intermediary (NVI) is called the Local Partner Network. Older content may reference our original name.

When service members separate or retire from the military, more than 45,000 nonprofits, thousands of public agencies, and countless other organizations and individuals aim to support their transitions back to civilian life. This series explores how communities across the country are collaborating across public, private, business, and social sectors to better connect the systems that serve veterans, by leveraging the principles of “collective impact.” The subjects featured are all members of National Veterans Intermediary (NVI) Local Partner collaboratives.

Recent research shows that loneliness is a health risk factor for many. A 2018 study suggests that social connectedness may even protect veterans, for example, against developing symptoms of PTSD. Opportunities to connect, however, can be tough to find; it can be difficult for veterans to talk about their experiences, especially with people who have not shared them and may not understand. The social gap in connectivity and understanding between current and former members of the military community and their civilian counterparts is known as the “civilian-military divide,” and for many, it can represent the isolation of the veteran experience.

Theater of War Productions is doing its part to help bridge the civ-mil divide and create opportunities for connection. Through dramatic readings of iconic plays, followed by candid discussions that touch upon themes related to service and reintegration, the 10-year-old company aims to help audiences gain a deeper understanding of the often complex experiences that many of our nation’s veterans share.

The company’s hallmark project, the eponymously named Theater of War, is designed to increase awareness of the invisible wounds of war. Professional actors read ancient Greek dramas — long thought to have originated both as a storytelling medium and a form of communal therapy — to audiences comprised of service members, veterans, and civilians, together.

The subject matter is intentionally weighty. In Sophocles’ “Ajax,” for example, a warrior of great strength and courage is betrayed by his kings and unjust gods, and ends up dying by suicide.

“[These tragedies] are a way to talk about the utter horrors of war and the challenges that it brings,” said Lisa Feder-Feitel, who works at ToW identifying leaders, local organizations, libraries, schools, and others to secure community panelists and fill the seats. Some of those hardships are the obvious, like being separated from family. But for some, military service can also lead to other challenging emotional experiences, including  “feeling alone — even though you’re part of a system and a brotherhood.” The paradox of feeling isolated even in the presence of others is an experience familiar to many veterans, and one that ToW is addressing head-on. Theater of War aims to leverage the performing arts as a platform on which to stage community conversations that include audiences that may not immediately see themselves as stakeholders in veterans’ wellness.

To expand its reach and impact, ToW applies “collective impact” theory to align a diverse network of organizations and government agencies with a goal related to the play or conversation at hand, and then coordinate activities to meet that goal.

Jennifer Splansky Juster, executive director of the Collective Impact Forum, which supports those who adopt the approach, noted that relationship-building and effective communication are critical to the success of collective-impact models.

“Building trust [means] the groups that are involved in collaborating are doing what they’re best at, and the sum is greater than its individual parts,” Juster said.

In the case of ToW, that might translate to help from partnering government agencies and nonprofits — ranging from the Department of Defense to the USO — in getting the word out about performances, distributing free tickets, and transporting veterans to productions at military installations, hospitals, libraries, homeless shelters and public parks.

ToW measures the impact of its productions through post-performance audience surveys, focus groups and impact-assessment studies conducted by outside evaluators. But the best metric may be that of the audience in the moment.

“If you’re looking for impact, come into the room and watch what happens,” said Doerries. “Theater itself is a certain experience that pushes people into a different cognitive space.”

Feder-Feitel keeps in touch with groups that attend ToW performances. Many ask to be invited to future events.

“We want, in a very tiny way, to duplicate what Sophocles did,” Feder-Feitel said. “That is, create an opportunity for people to feel safe, to feel valued and to speak from their hearts about their different experiences. They go from here, knowing they’re part of a larger community.”

This article was produced in partnership with NVI. NVI’s Local Partner network is the nation’s largest, most diverse, and most inclusive network of communities committed to the successful integration of veterans and military families. Learn more about NVI here.