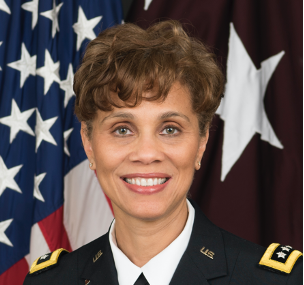 Although we celebrate International Women’s Day on March 8 and women’s history for the entire month, women are impacting positive change every day of the year. In the workplace, women help organizations increase revenue, serve as better mentors, and even acquire higher levels of education than their male counterparts. The Bob Woodruff Foundation has been benefiting from women in leadership roles since our inception. Throughout the month we will be featuring stories on women who have helped lead the foundation and find out what they have to say on issues including empowerment, mentorship, and gender equality.

Nothing was ever handed to Lieutenant General (Ret.) Nadja West. With no previously traversed path between West and her dreams, she often had to create her own. West became the first Black surgeon general of the U.S. Army in 2015. This was the culmination of many historic achievements for West during her military career. Among her many other notable accomplishments, West is the highest-ranking woman to graduate from the United States Military Academy at West Point and the first Black woman to attain the rank of lieutenant general.

Although West has been masterful at forging her own path, much of her motivation can be traced back home. West’s family was instrumental in her drive to serve her country. Her father joined the Army in 1939 when the branch was still segregated. While this must have presented significant challenges, he persevered and successfully served for 33 years. West’s nine older siblings also served in the military and she grew up eagerly anticipating the day she could follow suit.

Gender equality can be promoted by setting the conditions, establishing the culture, and providing the opportunities for women to be valued members of any entity of which they are a part.

West has clearly been a trailblazer for all women. But is it fair to expect so many women to overcome unnecessary adversity to pursue their dreams? She hopes to see a world where women are empowered so that the focus is solely on their contributions and not about proving themselves.

“To me, women’s empowerment means that the arbitrary barriers that are placed in front of people because of their female gender are removed so they can focus all of their talent and energy on being as productive as possible; without having to waste time and effort proving that they belong at the table in the first place,” West said. “It means they are able to live, work and contribute at the highest level of their potential.”

True mentorship is about showing, not just telling. West’s mother set an example for her that helped serve as a guiding force throughout her life.

“She was a person of very strong faith, and passed that faith onto me,” West said describing her mother’s influence. “She taught me from an early age the importance of being a person of character and integrity. She showed, by example, how to be disciplined and responsible, and how to persevere in the toughest of times.”

West’s parents wanted to ensure that she did everything in her power to position herself for success. Her mother “instilled in me how important it was to study hard, work hard and focus on getting a good education. She, along with my Dad, challenged me to expand beyond my comfort zone and build on small accomplishments to achieve even greater things.”

Most significant changes in society start as a spark at the grassroots level. But after that spark catches fire, leaders must recognize the need for change and use their power and privilege to make it a reality.

“There must be an environment where women are seen as peers, partners, colleagues, co-innovators, and co-problem solvers,” West said. “Those in positions of leadership and influence who foster the climate, and model inclusive and respectful behaviors, are key to promoting gender equality.”